Snapchat, Facebook, Instagram, Twitter, Google Maps, Spotify, YouTube, Pokémon Go… the list goes on as teens and adults alike whip out their phones as they drive to imbibe the internet. Over the years our instructors at The Next Street have received numerous questions as to the legal ambiguity of using apps that play music or provide directions while driving:

“How is it different than the radio or a CD?” “It’s just telling them where to go!” “What if the phone is in the glovebox?” “Is it really that distracting? It’s not like it’s texting.”

While many distracted driving laws have advanced to include texting as well as phone calls, only a few states have comprehensively restricted all cell phone use behind the wheel. It’s hard to know the extent of app usage while driving, as the problem is theorized to be drastically underreported.

Across the country thousands are injured every year in car crashes because of it.

There is no such thing as “multitasking” – a better term for it might be “switch-tasking”: going back and forth between several points of focus quickly, with reduced brain power associated with each point.

Don’t believe us? Besides the Google search you’re bound to perform, check out this article from Psychology Today.

In the link Dr. Nancy Napier describes how our brains have this “start/stop/start” process as we switch from task to task. Just like stop-and-go traffic is hard on your car, this process is hard on us: “it’s less efficient, we make more mistakes, and over time it can be energy sapping” she says.

There is a lot of pseudo-science and hearsay surrounding this, and conflicting information to be found on the internet. Safe to say focusing on a single thing, such as driving, can only make you better at doing that thing. Even listening to music can be distracting. Now, we’re not suggesting you rip out your radios and drive in complete silence alone: just be realistic when you’re on your next Sunday sojourn. Close Facebook for a while, don’t fiddle with your music, upload the pictures later, and realize the snap you just got will be there when you’re parked.

When folks use their phones for texting or apps behind the wheel, it isn’t the same as when they make a call with them. When texting or using an app like Snapchat, the phone is often in a lap or held no higher than the bottom of the steering wheel.

Because they don’t want to get caught.

Drivers of all ages are keenly aware that cell phone use while driving is unlawful. If they hold up their phones for the cops to see, they are “just asking” to get pulled over. So, instead, many drivers choose this “shoot from the hip” style to avoid detection.

Having the phone so low draws their eyes even further from where they should be for the driving task. They are looking completely off the road, without even a small amount of their peripheral vision engaged to warn them of danger. They are completely disengaged, and this leads to crashes.

Snapchat has come under fire for a number of reasons since its inception in 2011, and has gained a certain reputation because of them. While the instant sharing of ephemeral memories is generally embraced by millennials and subsequent generations, this particular breed of digital communication can quickly spell disaster on the roadways.

While there are many ways people text, sometimes not even looking at the phone when responding or using a hands-free voice-to-text feature, to send a snap or receive one is a measured endeavor. Often videos are shared, which draws the attention away fully from driving for several seconds at a time.

One or two seconds of inattention on the road can mean a car crash. A text is something a driver can take quick glances at, going back and forth from the windshield to their phone (but remember that link from earlier? It’s still not a good idea).

A snap, however, begs full attention for multiple seconds: either watching a video, examining a picture, taking a selfie (and don’t forget the filters!) What also adds to the urgency of the message is if you miss it (and it might only display for three seconds) *poof*, it’s gone. While the ability to replay snaps exists, that can take the attention of the driver away for even longer!

The investment of brain power it takes to use Snapchat is just too dangerous to do behind the wheel. Period.

Just because it’s safer, doesn’t mean it’s legal: hands free devices such as earbuds, speakerphone, and Bluetooth are all illegal for 16 and 17 year olds to use while driving here in CT. Just park your phone and drive your car!

Learn everything you need to know about safe driving by taking a Driver's Education class with The Next Street! 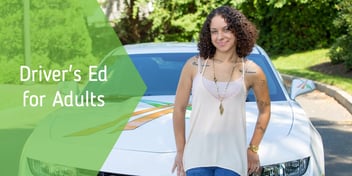 Driver's Ed for Adults. It's Not Just For 16 Year Olds!

Need your license? In Connecticut, it is REQUIRED that you take an 8-Hour Safe Driving Course,...