Our first spot was on Lincoln Avenue, where Officer Soccio explained how parents picking up their children after school will sometimes double and triple park on the road which causes a major traffic issue. However, he did mention that they do patrol the area and try to keep parents moving to clear it up as soon as they can. Next, we visited a major intersection on Bank Street, and Ocean Street which is what Officer Soccio described as a major “artery” within the city when it comes to traffic. He went on to explain that during rush hour the major intersection gets so busy that it often causes the issue of “blocking the box”, which is when cars get stuck in in the middle of the intersection when trying to take a left turn. In this intersection it will eventually lead to “grid lock”, meaning no one is able to move which can back up roads well beyond the intersection. Lastly, we visited beautiful downtown New London that is brought to life from a lot of visitors that are using the ferry to travel to Block Island. With its welcoming store fronts and variety of restaurants it was obvious to see that there was some traffic trouble here. A major concern was when cars were taking a right off of Bank Street onto State Street. There are two right turning lanes. After the turn the road itself veers left. Where this happens, often drivers in the right lane seem to drift into the left lane without notice. Which causes the issue of people being cut off and sometimes causes accidents. Overall, New London and the Officers that protect it have a good handle over these areas. They are working to keep them moving and to keep drivers safe. There are surely more areas than this that were not mentioned that the Officers also stay on top of. It takes a lot of work for them to keep these areas clear but with some help from drivers by being mindful of the tips that are given to possibly avoid these areas and some of the mistakes that are made in these areas it can make driving in the city easier and safer for everyone.

At our New London classroom we teach our new drivers how to correctly handle these trouble spots and others. Visit our page to learn more about our courses and offerings.

Family, food, gifts, and of course, ugly sweaters - all words surrounding the winter holidays! It...

We've told you how to winterize your car, so your car should be ready. But what about you? Are you... 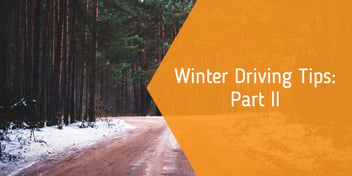 Another spell of winter weather has come our way, and there's sure to be more where that came...